I'm a Mac holdout; trapped in a technical purgatory since the end of 2015.

You know the type. We use Apple machines but lament the inadequate keyboards, vanishing Esc keys, the... touchbar, and a definition of Pro that waffles between "does little beyond web browsing" and "will forego their next car to afford this computer".

Fed up with Apple's neglect and frustrated by their exclusion of my '09 Mac Pro from modern OS's and Xcode, i decided to build my own Hackintosh.

Why not buy a new Mac Pro?

$8,499 is the cost of a Mac Pro with comparable specs but slower CPU, storage and RAM.

I have been daily-driving my OpenCore Hackintosh for a full week. This is too short to have long-term learning but enough to share my early experiences.

I would start but summarizing my experience as both good and promising. The speed of this machine is frankly unlike any Mac i have ever touched. The snappiness and responsiveness is incredible. Boot times are a couple of seconds and OS X with 64GB of ram feels like returning to the Snow Leopard days where resource availability faded from my consciousness all together.

Along those lines, apps are another area of [mostly] smooth sailing. Apart from video chat (more on that later), every app i drive regularly seems to work brilliantly. Telegram (including voice chat), Textmate 2, iTerm 2, Firefox, Affinity Photo all run without issue. In fact, some apps like Firefox and Messages have actually improved with the swap, since my previous '09 Mac Pro was stuck on High Sierra and apps were growing unusually buggy.

Compatibility is one area i have been pleasantly surprised about. I wasn't sure what to expect with devices and peripherals. I am happy to report that stuff seems to just work. My WASD keyboard, Logitech mouse, iPhone charging, LED cinema displays, all work generally without issue.

Another quality i've come to appreciate with this build is the noise. Rather, the silence. I considered my Mac Pro a quiet box and compared to other towers i've been around it was. Discontent with just making a Hackintosh, this machine was also my first attempt at a fully custom water loop. This has paid off and then some. The thermals and noise output of this machine leave me downright prideful.

So far i have found 3 issues my current build. I should note: as of this writing i have done nothing to attempt to resolve these issues. I plan on writing another piece after a month or two that will talk about my long term feelings about the machine.

First is sleep. This is a contentious topic for Hackintoshes and i have evidence this is something i can fix with some Bios tweaks. As someone who usually has uptimes in the hundreds of days, this will be a welcome fix.

The second is video chat. For reasons i am yet unclear about, the moment my video starts to be used in Zoom, Hangout, etc. my peripherals freeze. The machine continues to function but i lose all mouse and keyboard input and require a restart. Given the current world situation, you can imagine the frustration this has caused.

Finally, bootcamp seems to be a long shot. I made a brief attempt at booting a windows drive while in OS X and it failed with some obscure message. This is not functionality i had nor need, so it was more of a "huh" moment that a point of concern.

Should you build one?

Maybe. I mentioned at the start of this piece that i am a Mac holdout. With that comes an adoration for OS X and, more importantly, the app ecosystem that evolved on top of it. I consider iTerm to be the best-in-class terminal emulator and Textmate and i have enough history together that i can't bring myself to change.

If you are like me and feel routinely neglected by a company that once confidently led the way for you, i think a change is in order. I have 3 other Mac's in my house, so if this failed, my productivity would be fine, even if my pride wouldn't be. The Hackintosh for me is an experiment i badly want to work, and thus far it does. But it doesn't Just Work. At least not quite yet.

So what to buy? If money is no object buy a $9k Mac Pro. At that point the machine justifies a considerable price tag, even if it uses outdated hardware.

For the rest of us, i think building a Hackintosh can be viewed a lot like buying a project motorcycle. You don't do it because it will be the fastest way to get fully up and running. You do it for the love.

Every time i use a Windows or Linux machine i become aware of how adapted i am to OS X. I have decades of keyboard shortcuts, muscle memory and app knowledge that i would be expensive and frustrating to discard. Apple has snuffed the needs of me and countless others with their hardware support the last few years. The Mac Pro, which was a step in the right direction, includes a price tag that's effectively a middle finger to those very same customers.

My Hackintosh is my vote with my dollars. I am willing to suffer some early issues in service of daily driving machine i am once again proud of. I will find some joy in resolving my early issues, too. If that sounds like you, take the dive. If that sounds like nails on a chalkboard, buy something else, or cling to your hope that Apple remembers you exist.

For those curious, here are the details of my build and some resources i followed to get up and running.

Few of these are Hackintosh-specific. CPU and GPU will impact your build in material ways. Choosing an AMD CPU makes your Hackintosh processes more difficult. Mac OS is built explicitly for Intel CPU's. The community has done amazing things, though. And as a consumer who votes with his wallet, no hardware company deserves my money more these last few years than AMD.

What AMD lacks in CPU support it makes up for in GPU support. Apple and NVidea continue their corporate dickwaving contest now 8 years running. This translates to poor driver support for NVidea GPUs. AMD gets the nod here. You can spec out a Mac Pro with a 5700XT, for instance. If you are going for a Hackintosh, AMD is your GPU manufacturer. 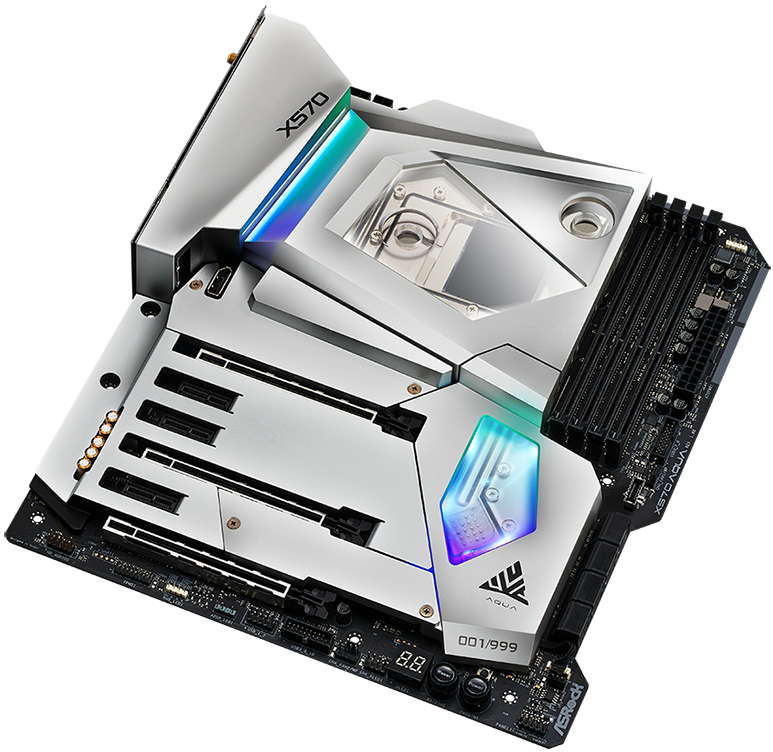 Finally, i would be remiss to not call out the ASRock Aqua motherboard. It is stupid expensive and wildly overkill for my purposes. It is also brilliant. Easily one of the prettiest pieces of hardware i've seen from a PC manufacturer in ages. Mobo's are the unsung heroes of machines, and while i spent a small fortune on this one, i adore the aesthetic of it and get water-cooled VRM and chipsets. You should probably buy something cheaper.

I built my Hackintosh using OpenCore which is a newer and still less polished alternative to Clover. It has a more promising future and the update regularity is comforting.

I also stumbled on TechTunerLife with this incredible tutorial on how to set up your Hackintosh installer from a Windows machine. As someone who learns by watching better than reading, this was a Godsend. I highly recommend watching it if you are considering an AMD Hackintosh build to see if it is something you would be comfortable with.

Finally, the AMD OS X community is a treasure trove of tips and process. If you run into issues, this will be a great place to start.

tl;dr: I built an AMD Hackintosh to replace my Mac Pro. It's great, lightning fast, but has a few kinks.

Written by Ben
https://www.shootskyward.com
Ben is the co-founder of Skyward. He has spent the last 10 years building products and working with startups.